Originally published in the Prince Albert Daily Herald on November 23, 2017

In the early hours of a frigid January morning in 1967, a devastating fire at the Astro Hotel on the corner of 1st Avenue West and 11th Street in Prince Albert (site of the present-day A & W) took the lives of two people. Residents of the hotel, William Odgers, 60, and Vern Benham, 48, perished in the fire.

At 7:30 a.m. on that fateful day, the night clerk at the Astro Hotel got up from his desk in the lobby and went back to the kitchen to light the burner on the gas stove. There were only five guests registered in the 52-room, three-story hotel, and they would soon be coming down for breakfast.

Shortly after the clerk returned to his desk in the lobby, he heard a loud explosion in the kitchen. He ran back to discover the kitchen and stairwell in the northwest corner of the hotel engulfed in flames. The inquest, held one month later, determined that “the night clerk had lit the gas burner improperly or that the flame had been snuffed out. Gas apparently leaked throughout the kitchen and was ignited by the pilot light from other gas utilities in the room.” The verdict of the inquest was “unintentional negligence.”

Fire Chief George Slater reported that the entire fire department – 32 firemen – had been called in to fight the blaze, one of the largest in the city’s history. All available fire-fighting equipment, including three pumpers and one ladder truck, was used in an attempt to save the building.

Of the five hotel guests, one hadn’t stayed in the hotel the night before. Another guest had left the hotel before the fire broke out. Of the three guests remaining in the upstairs rooms, David Todd, coughing and almost overcome by smoke, was rescued from a window on the third floor by firemen shortly after they arrived. Mr. Todd said he had attempted to knock on the doors of the other guests’ rooms but had been unable to rouse anyone.

Chief Slater told the PA Daily Herald that firemen were unable to enter and search the rooms in which the two deceased guests were staying due to heavy smoke and flames which ravaged the entire building within two-and-a-half hours. The first body was found in the hallway on the second floor of the hotel at about 9 a.m. The second body was found in the rubble at about 1:15 p.m. 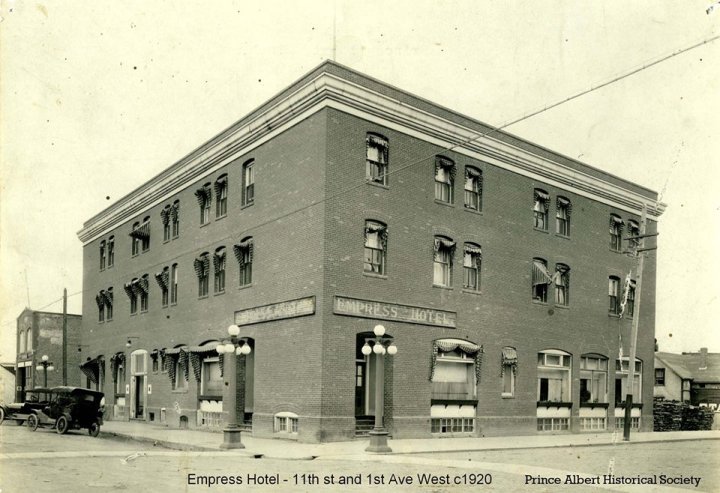 The hotel, originally called the Empress, was built in 1910. With the arrival in Prince Albert of the Canadian Northern Railway in 1906, hotel guest rooms were filled to capacity with construction workers, commercial travellers, and families arriving to settle in the area. The Men-only barroom was a popular spot. A typical Saskatchewan hotel tavern had a long, ornate wooden bar with a large mirror behind it, brass foot rails, and brass spittoons. During Prohibition (1915 to 1924), bars closed down in Saskatchewan hotels. The ornate fixtures were stripped out, and the barrooms became ice cream parlours or other types of business. The Depression of the 1930s saw hotel keepers, like everyone else in Saskatchewan, struggling to get by. Unable to afford renovations or to replace deteriorating furniture and equipment, hotels were generally shabby places. The Second World War brought better economic conditions, and hotels became more inviting. 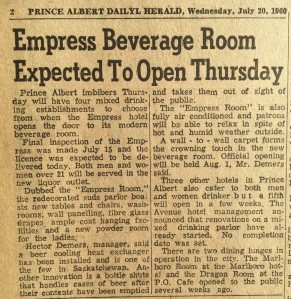 Wes Walker and his wife Eva purchased the Empress Hotel on April 15, 1964. By December of that year, the lobby and guest rooms had been redecorated, and by the spring of 1966, the Walkers had changed the name to the Astro Motor Hotel, and covered the hotel’s brick exterior with vertical panels to give it a more modern look.

By the 1960s, fewer and fewer people were booking rooms at the older hotels. Motels were the accommodation of choice. The main business at the Astro Hotel – with most of its 52 rooms sitting empty – was food and beverage sales. “We cater to banquets, private parties, staff parties, weddings, clubs, etc. on or off our premises,” the hotel’s December 1964 ad stated. “We have the newly decorated ‘Corvette Room’ with accommodation for up to 150 persons for your special occasion.”

Five Prince Albert service clubs – the Lions, Optimists, Cosmopolitans, Rotarians, and Jaycees –  utilized the meeting rooms at the Astro Hotel. In the fire in 1967, all five clubs lost not only their meeting quarters, they also lost records, banners, flags, trophies, and plaques. The Rotary Club suffered the greatest loss in equipment, but managed to salvage, and later restore, a ceremonial brass bell from the rubble.

After the fire, Wes Walker told the newspaper that he valued of the hotel at $350,000. He said he had some insurance but not enough to cover the entire loss. The charred ruins of the Astro Hotel were demolished on April 25, 1967.